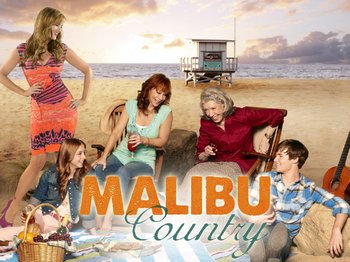 A sitcom starring Reba McEntire that aired on ABC from 2012–13. It's basically a Spiritual Successor to her previous sitcom, Reba.

Reba Gallagher stands conflicted at a press conference where her country superstar husband publicizes an extramarital affair. When he condescendingly suggests that she'll always be by his side, she takes the mike and demands a divorce. She then takes her two kids, June and Cash, and her mother, Lillie Mae (Lily Tomlin) to his previously unknown summer home in Malibu, where she tries to get back into the country music game herself (under her maiden name MacKenzie) after getting out of it for the good of her marriage. Along the way, she tries to keep her kids grounded, get on good terms with her new neighbor Kim (Sara Rue), and fights with her chosen record producer, but ultimately wows the producers's assistant Geoffrey (Jai Rodriguez)...which gets her absolutely no pull because the producer still doesn't know his name.