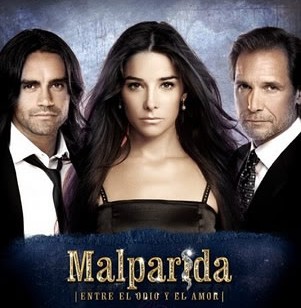 Will she finally go for the Happy Ending with the man at the left, or the revenge against the man of the right? She's called "malparida", do you really have to ask?
"Love kills, hate heals."
— Grazia Herrera
Advertisement:

Malparida was a 2010 Argentine telenovela. It told the story of the poor Renata Medina, whose mother María Herrera was in love with the rich Lorenzo Uribe. Lorenzo was forced by his family to leave her, and she died a short time later. Renata and her grandmother Grazia swore vengeance against Lorenzo, so she took a job with him, in order to seduce him.