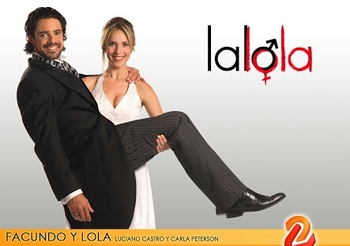 Ramiro "Lalo" Padilla is a charming and handsome magazine director for the media company "High Five", in charge of editing their successful magazine Don. Lalo is also a shameless womaniser and one of his jilted lovers decides to get revenge by recruiting a witch to magically turn him into a woman.

Lalo goes to bed himself one night and wakes up to following morning to discover he is now a beautiful woman. With only his female best friend radio host Grace (herself with a unrequited crush on Lalo) to help 'Lola', as the new woman calls herself has to deal with being a woman, pretending to be her own cousin, explaining away the disappearance of 'Lalo' and last but not least dealing with her complicated feelings with her handsome and good natured co-worker Facundo...

The series was commercially and critically successful and inspired remakes in Belgium, Chile, Greece, India, Indonesia, Peru, Philippines, Portugal, Russia, Spain, Turkey and Vietnam. A pilot for an American English-language remake was made in 2009 which would have starred Rhea Seehorn and James Van Der Beek but it was never picked up.