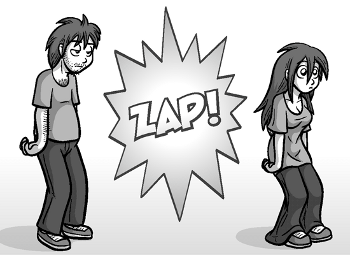 ZAP! Long hair included.
Ross: Help me out here. When you come out of the "brain transplant", you are going to be her?
Joey: Yes, but in Drake Remoray's body. Why is this so hard for you to get? I thought you were a scientist!
— Friends, "The One with Joey's New Brain"
Advertisement:

A character has undergone a complete physical sex change, usually through magic or Applied Phlebotinum. Depending on the medium, genre, and storyline, this may be a one-time temporary change, a recurring change (causing the character to jump the gender line often), or even permanent.

Sometimes it's the same person, sometimes it's a man and woman sharing one body. If a man and a woman swap bodies, it's a variant of "Freaky Friday" Flip. Male-to-female transformations tend to vastly outnumber the opposite when this trope is in play, probably due to Most Writers Are Male.

The trope can be played many different ways. It might be Played for Laughs, Played for Drama, or even played for horror if Loss of Identity or an unusual amount of Squick is involved.

Contrast with Rule 63 and Gender Flip, two tropes generally related to "alternate" versions of characters who, In-Universe, have always had the "opposite" gender from what the audience would expect. She's a Man in Japan is basically "Gender Flip via Localization", where Executive Meddling results in a character's sex being changed to meet the perceived needs of another market. But as with the aforementioned tropes, Gender Bender characters who previously wore a distinctive outfit may wear a Gendered Outfit, tailored to their new sex, after the change.

Can lead to a Mister Seahorse plotline, though not nearly as often as one might expect; when it does (especially when the First Law of Gender-Bending is in play), it is often part of a Babies Ever After epilogue, rather than an active part of the story.

Contrast with Transgender and Hermaphrodite, which are real-life phenomena (though on rare occasions, a Gender Bender character might turn into a hermaphrodite instead of, strictly speaking, the "opposite sex"; also, Gender Bender stories can intersect with transgender characters, by having someone transition unexpectedly by magic, or have the experience of being gender-changed bring a transgender character out of denial. Not to mention all the possibilities of using Gender Bender stories as metaphors for transgender identity...). Also contrast with Easy Sex Change, which deals with idealized but somewhat realistic takes on the Transgender experience. Not related to Was Once a Man.

If the character belongs to a species that does this as a regular thing or explicitly has a superpower that grants them that same property, see Sex Shifter.

with the female version of the character almost always being more extensively gender-coded than the male version. This may lead to a Sobriquet Sex Switch.

Finally, in accordance with the aforementioned Laws, as well as certain demographic reasons, male-to-female changes are far more likely than female-to-male ones, and the rare female-to-male ones are usually less susceptible to the Three Laws of Gender Bending.

In social justice circles, this trope is criticized for its implication that sex and gender are the same thing, as well as for excluding non-binary people. Others find it good as an exploration of gender's fluidity.

Though this trope has been used in media for decades, the name most likely came from the season one episode of The X-Files of the same name that features murderous beings that can change their sex at will to seduce their victims.

Not to be confused with Animal Gender-Bender, which deals with putting sex specific animal features on both genders.