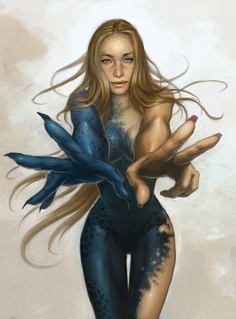 Shapeshifters are very common in fiction due to their flexibility. They can turn into a wolf, a giant, a tree, a whale, or sometimes only transform into another person.

How much a humanshifter can change varies. It could be just the face or it could be the whole body. The latter can lead to Gender Bender tropes. While Humanshifters don't have the versatility of being able to shift into another animal, they have their advantages. They are usually a Master of Disguise, able to replace their subject, and wreak havoc by many ways. Done rightly, they could bring down entire kingdoms without having to personally use a weapon.

See Doppelgänger. Compare Shapeshifter and Master of Disguise. Contrast Wig, Dress, Accent. For nonhumans that become humans, then that's Humanity Ensues. If someone is involuntarily shifted then see Clone by Conversion. Sexshifter and Dual Age Modes are subtropes where shapeshifting is even more restricted, only changing sex and age, respectively.