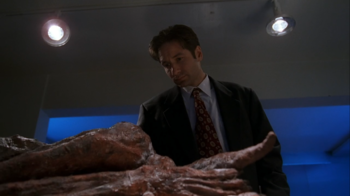 "You ain't no athlete, and you sure the hell ain't no Einstein. But at least you got that tail. Otherwise you're just small potatoes."
Written by Vince Gilligan
Directed by Cliff Bole
"Well, um, if this musculature underlies the entire skin, then maybe it could be utilized to remold the skin's shape and texture. Which would go a long way to explaining why we're looking for a man who can appear to be his own father, or anyone else for that matter."
— Fox Mulder
Advertisement:

Following an unexplained spate of babies being born with tails in a small town, Mulder and Scully search for a man who possesses the ability to change form.

Scully: I don't imagine you need to be told this Mulder, but you're not a loser.
Mulder: Yeah, but I'm no Eddie Van Blundht either. Am I?