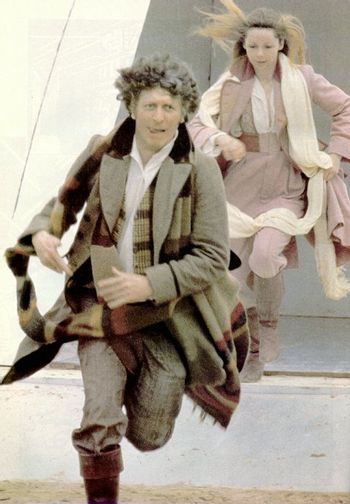 Well, best to get the new Romana in tip-top shape, I guess...
"Well Davros, I see the long dark has done nothing to cure your megalomania. Have a jelly baby!"
—The Doctor
Advertisement:

The one where the Doctor makes the "Daleks can't climb" joke and Romana casually upends the rules of regeneration.

Is there a stowaway aboard the TARDIS? No, it's just Romana, who has regenerated off-screen, for no apparent reason, and has chosen to do so into an identical double of Princess Astra. The Doctor tells her to pick something better, and she shows off several more very alien bodies (none of which meet the Doctor's approval either) before returning to the one she started with. (The Doctor Who Expanded Universe has made several attempts to explain why Romana regenerated, as well as how she was able to change her form several times without wasting regenerations. Few make real sense.) Also, K-9 comes down with a case of robot laryngitis and stays in the TARDIS for the rest of the adventure. If you've begun to notice just how impractical K-9 is as a prop that the writers have to keep finding ways to sideline him out of stories filmed on location, you're not the only one.

Meanwhile, the TARDIS has arrived on a seemingly deserted planet that the Doctor finds naggingly familiar. It's Skaro, home planet of the Daleks. The Doctor last visited it five seasons ago, when he crossed metaphorical swords with the Daleks' creator, Davros. The Daleks have also returned, looking for their creator; they'd left him for dead when they decided he had outlived his usefulness, but now they've found a new use for him and could really use his help now.

The Daleks' problem is that they've reached a stalemate in a war with the human-looking Movellans, and need Davros to cast a fresh eye on the problem. Speaking of Movellans, there's a group of them come to find out what the Daleks are up to, and when they find out they decide that if the Daleks are taking advice from Davros, they'll take advice from the Doctor — whether he wants to give it to them or not.

The Doctor teams up with La Résistance and very gleefully plays cat and mouse with Davros for a while. Romana gets herself kidnapped by the Movellans, who turn out to be not human at all, but a race of robots led by a central computer. They're locked in a war with the Daleks, and — as the Doctor points out — the two sides are so logical that they can always perfectly anticipate each other. They need a random element, which the Doctor happily provides by annoying Davros some more. He defeats a Dalek with his hat (by putting it over the eyestalk), and pushes Davros' only remaining hand down on the big red "blow up the entire Dalek suicide squad" button. He and Romana high-tail it off the planet very quickly.

This story was a turning point for the Daleks, for better or for worse — every Dalek story for the next decade was more of a Davros story with some Daleks in it than an actual Dalek story, and the Daleks themselves would be more disposable flunkies to Davros. This story would also mark the beginning of a prolonged story arc that would stretch for the remainder of the Classic Series, in which Davros' reawakening and his ideological differences with his own creations snowball into a Dalek civil war, coming to a climactic head nine years later.

It's worth noting that, though this story was credited to Terry Nation, the director claimed on the DVD release that it was "98% written" by then-Script Editor Douglas Adams. Either way, this is the final Dalek story with any contribution from the foes' original creator.

The Daleks in this story are also a bit more on the Straw Vulcan side than usual, and the episodes insist on calling them "robots" and "computers" a lot. Nobody can quite seem to agree on whether this was done by Nation or Adams. A Dalek mutant outside its casing even shows up, so it's not like they really intended them to be robots — it seems either Adams or Nation just really liked the word "robot".

Finally, on a more trivial note, this is the only serial after "The Green Death" in 1973 to call each individual instalment an "episode" rather than a "part," the latter of which had been standard since "The Time Warrior". The show would immediately go back to the "part" labelling with the next story, keeping it in place for the remainder of the Classic Series' run.