Film / Terminator 3: Rise of the Machines 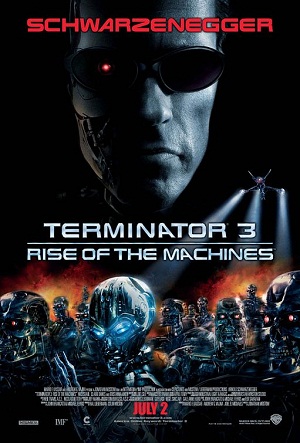 "I'm back."
John Connor: No, you shouldn’t even exist! We took out Cyberdyne over ten years ago. We stopped Judgment Day.
Terminator: You only postponed it. Judgment Day is inevitable.
Advertisement:

Terminator 3: Rise of the Machines (2003) is the third film in the Terminator franchise. It is the first film in the series to be directed by someone other than James Cameron, director Jonathan Mostow.

In the aftermath of Terminator 2: Judgment Day, the Connors appear to have prevented SkyNet's takeover: the date Reese cited for Judgment Day has come and gone, and an adult John Connor lives off the grid to make sure no one (including Terminators) can track him down. But out of the blue, another shapeshifting Terminator, a T-X Model with a female appearance, shows up to carry out a specific mission: kill John Connor and as many of his future Resistance lieutenants as possible. A T-850 Model Terminator (functionally similar to the T-800, but with a few minor upgrades), reprogrammed to protect John Connor, also shows up.

John, who resents everything about what his late mother Sarah told him about the future and raised him to become, eventually returns to the fight alongside his reluctant ally Kate Brewster and the T-850, to once again stop Judgment Day and save the human race.

The film was followed by Terminator Salvation. While it has never been clearly considered as a sequel to Rise of the Machines, it did acknowledge elements the latter established such as Kate Brewster and the T-800 line's unstable fuel cells.

"All I knew was what the Terminator taught me. Never stop fighting. And I never will."

Despite the final arrival of Judgment Day, John Connor will be there to rally the survivors to save humanity.

Despite the final arrival of Judgment Day, John Connor will be there to rally the survivors to save humanity.