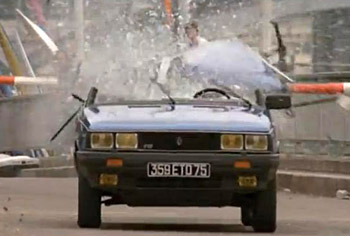 In chase scenes, there comes a time when the trailer of a Mack blocks the driver's path. And, there isn't time to avoid a collision. What does one do?

If the car is low enough and/or the trailer high enough, most of the car will pass under it safely. Except for the roof and windows. The car is perfectly drivable afterward. The driver may even remark, "I've always wanted a convertible." Hence, the name of the trope.

Sometimes, if the car's low enough, it might just fit Under the Truck.

The MythBusters show this trope is Truth in Television: their tow cable-guided test car kept going until it left the test site and crashed into a ravine. A Sub-Trope of Low Clearance.

What was once a cab is now an instant convertible.

What was once a cab is now an instant convertible.