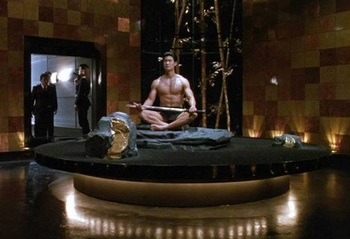 The OCP has RoboCop. The Kanemitsu Corporation has Otomo.
"A person in a conflict-oriented profession (i.e. assassin, negotiator, advertising personnel, etc) who follows a samurai-like code of ethics. This generally means limiting collateral damage (whatever that might be, depending on the profession), treating their job as 'just business (not bringing personal animosity into competition),' and respecting competitors in their profession. Coined as a part of the cyberpunk movement in science fiction, and exemplified by Case in Neuromancer by William Gibson, and Hiroaki Protagonist in Snow Crash by Neal Stephenson."
— Urban Dictionary
Advertisement:

A Corporate Samurai has talents that are in high demand by one or more of the following: Mega Corps, The Syndicate, The Cartel, Law Enforcement, Inc., warlords, other power brokers or royalty. The Corporate Samurai will associate and interact at the executive level and works for or possibly as a Corrupt Corporate Executive.

Often, the Corporate Samurai will be The Dragon, or The Brute if part of a villainous group.

Similar to a bag man but at a higher level and with more responsibility, the Corporate Samurai is often responsible for whole operations or campaigns, rather than simple mook wet work. The Corporate Samurai has, through merit and ability, risen above Red Shirt status. He may also be more cerebral and less kinetic with his approach to conflict resolution. He will often be a Man of Wealth and Taste and a Badass Normal, and will usually be a Badass in a Nice Suit. Often the Corporate Samurai is sent to deal with situations and to engineer or arrange outcomes that a simple mook couldn't handle.

Taken from the Richard K. Morgan's Takeshi Kovacs novels, and "Market Forces". This trope is found throughout Cyberpunk, Post-Cyberpunk (where they're much more likely to be portrayed as heroic) and hard boiled noir, among many other genres. Will unfailingly be a Consummate Professional.