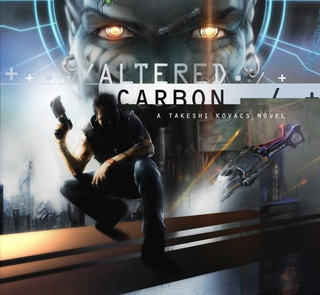 Well, fuck them. Make it personal. note This is actually a quote from Quellcrist Falconer

but Kovacs tends to take it to heart
"Pull on the new flesh like borrowed gloves/And burn your fingers once again."
Advertisement:

The series takes place some 500 years into the future, in the UN Protectorate, a totalitarian government spread over several different planets that enforces its rule with the use of 'Envoys,' mentally-conditioned Shock Troopers who specialise in covert deployment and bringing down rebel governments.

In the series Mars has been discovered to have once been part of a galaxy-spanning alien civilisation, which collapsed for reasons unknown millennia ago.

All three books follow the Sociopathic Hero Takeshi Kovacs, an ex-Envoy turned criminal/mercenary/bodyguard/detective, who uses his talents for problem solving coupled with insane violence to earn a buck. Takeshi is not without his psychological problems, however, many of them received in service with the Envoys and a fair few picked up afterwards.

The first book, Altered Carbon (2002), sees Kovacs brought out of digitised storage (used as punishment for crimes) and sent to Earth to work as a private detective for the super-wealthy Laurens Bancroft. As a "Meth" (from "Methuselah"), Bancroft can afford to live for several lifetimes, repeatedly downloading himself into fresh bodies. He's recently returned from the dead, thanks to a personality backup, after an apparent suicide, but he maintains that he would never kill himself. Due to the backup schedule, he is missing the 48 hours prior to his death. He hires Kovacs to find out who killed him and why.

The second book, Broken Angels (2003), is a war story set on the planet Sanction IV. Kovacs is now serving in a mercenary unit fighting for the UN against the native rebels of the planet, when he encounters a pilot named Jan Schneider, who is looking for protection for an expedition to exploit a Martian artifact discovered just before the war broke out. Kovacs helps Schneider break out the archeologist who led the initial expedition from a POW camp, and the trio them embark on a mission to find a corporate sponsor to finance their mission.

The third book, Woken Furies (2005), finds Kovacs back on his homeworld of Harlan's World, a largely aquatic planet colonised by Japanese and Slavs. The book begins as a Roaring Rampage of Revenge as Kovacs hunts down members of a Church who sentenced a former partner of his to death, but he soon becomes involved in a growing revolutionary plot to overthrow the UN-backed government.

A television series adaptation based on the first book was released on Netflix in 2018.

A original Graphic Novel Altered Carbon Download Blues co-written by Richard K. Morgan and Rik Hoskin with art by Ferran Sellares was published by Dynamite Comics in May, 2019.

Altered Carbon The Roleplaying Game set in the world of the TV series in 2020.