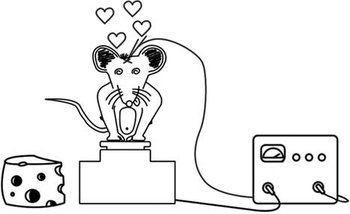 Electricity is versatile stuff. While it can burn you, it can also be used to stimulate nerve cells to give feelings of actual pleasure. One common form, especially in Science Fiction, involves using small amounts of current applied directly to the "pleasure centers" of the brain.

The concept of the "pleasure center" was based on research on rats done in The '50s, and those studies have been partially discredited since, but there is still some Truth in Television here. Scientists developed an orgasm device for women by accident when the doctor inserted a spinal cord electrode that he was using to relieve the woman's chronic pain into the wrong place and got an unexpected reaction. Although further tests showed that less than 2% of women would actually get that effect from it.

Although the effect may happen by accident, this is not the same as Too Kinky to Torture. This is about electricity causing actual, physical pleasure, not just pain that someone happens to enjoy.

May be used to try to brainwash someone, as direct brain stimulation can be extremely addictive. In such cases, it's closely related to Getting Smilies Painted on Your Soul.

Contrast with Agony Beam and Orgasmatron.