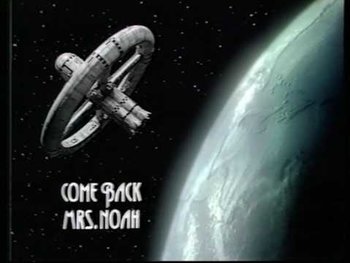 In 2050, British housewife Gertrude Noah (Sugden) wins a cookery competition, and the prize is a tour of Britannia Seven, the UK's new Space Exploration Vehicle. In the pilot episode, the craft is accidentally sent blasting off into space with Mrs Noah and a small crew on it; said small crew consists of two mathematicians, Carstairs (Donald Hewlett) and Fanshaw (Michael Knowles), and low-level maintenance man Garstang (Joe Black), with roving reporter Clive Cunliffe (Ian Lavender) dragged along for the ride as he was covering Mrs. Noah on her tour for news programme Far and Wide (the 2050 equivalent of Nationwide).

The series then centres on efforts to bring everyone back to Earth. After a failed effort to nudge the spacecraft into the Earth's atmosphere, the series concluded with Mrs. Noah and everyone else on the Britannia Seven careering off uncontrollably to the depths of space.