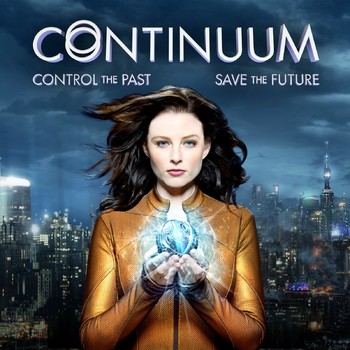 They're running out of time.
2077. My time, my city, my family. When terrorists killed thousands of innocents, they were condemned to die. They had other plans.

A time travel device sent us all back 65 years. I want to get home, but I can't be sure what I will return to if history is changed. Their plan: to corrupt and control the present in order to win the future. What they didn't plan on was me.
— Opening Narration (Seasons 1 and 2)
Advertisement:

Continuum is a Canadian science fiction series that ran for four seasons from 2012 to 2015. It was created by Simon Barry, who also acts as one of the show's executive producers. It aired on Showcase Television in Canada and Syfy in the UK and the USA.

Kiera Cameron (Rachel Nichols) is an ordinary police officer — ordinary, that is, for the corporate-run, vaguely dystopian future of 2077 in the Vancouver District of the North American Union or NAU. She's assigned the routine job of guarding captured terrorists belonging to Liber8 during their very public execution. However, the group has an escape plan that involves Time Travel and Kiera is pulled along with them back to 2012.

Underground, motivated and very dangerous, the surviving Liber8 terrorists are determined to wage their war against the forces they believe will destroy the future in the city of Vancouver, British Columbia and it's up to Kiera to stop them. Luckily, she's not alone: she's quickly pulled into the orbit of Detective Carlos Fonnegra (Victor Webster) and the Vancouver Police Department, who think she's an expert on this "new street gang up from Portland," and Alec Sadler (Eric Knudsen), a young tech prodigy who will shape the future Kiera and the terrorists come from.

Now has a Character Sheet and recap page.

Has nothing to do with Stargate: Continuum besides also being centered on time travel. Not to be confused with the webcomic or the RPG of the same name.