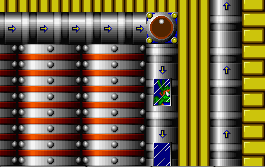 How does he not get dizzy?
An unusual form of getting around, often found in video games. Hop in one end of the tube, get shuttled through in some manner, and come out the other end. Instead of taking a direct route, the tube may take a complicated snake-like path to the destination. Sometimes the hero must navigate an entire Pipe Maze. Such travel may involve a Traveling-Pipe Bulge.

Please note that this does not include using The London Underground (colloquially referred to as "the Tube") to travel.