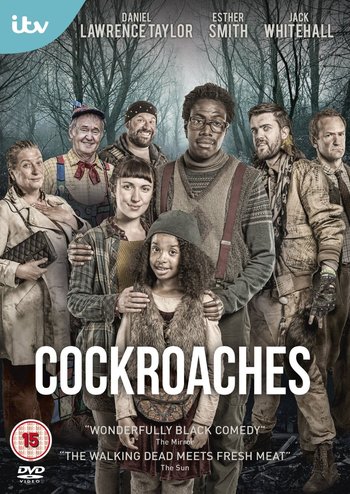 Cockroaches is a post-apocalyptic Brit Com about one family trying to survive in a wasteland of cannibals, perverts and one insufferable-ex. Our heroes struggle with boredom, fear and the ethics of cooking with their own body fluids. It's also about those absurd ideas on which our society is built. Like, how do you decide who's in charge? Do you re-establish the idea of money? What do you teach children? Is Cannibalism really such a bad idea if you're really really hungry?

Tom and Suze, two nineteen-year-olds both dreaming of the future, have sex when nuclear war strikes. Unfortunately, they then survive. Awkward. Ten years later, they're wandering the wasteland where England used to be. They're joined by Laura, the child they conceived on the night of the nuclear war. They end up at a camp of survivors, where it turns out that a lack of food and water is merely the start of their problems.

Cockroaches premiered on TV in January 2015 on ITV, the full six episode series made it's debut on ITV Player online shortly before.