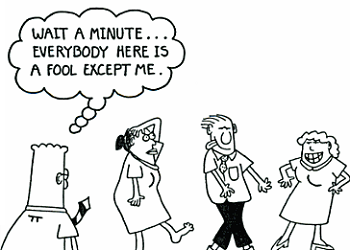 "I began to get a feeling... of being the only sane man in a nut house. It doesn't make you feel superior but depressed and scared, because there is no one you can contact."
— Will Dennison, And the Hippos Were Boiled in Their Tanks, by William S. Burroughs
Advertisement:

Picture this: Alice is a Psycho for Hire, Bob is a Cloudcuckoolander, Henry is an Empty Shell, Charlotte is a Chaotic Stupid prankster, Daniel is the Annoying Younger Sibling, Emily is a Jerk with a Heart of Jerk, Maria Rhymes on a Dime, Franklin is a Mad Scientist, Gardenia is a Holier Than Thou Lawful Stupid, and Lily is a Mad Artist who's obsessed with her wax 'statues' . Looks like your standard Dysfunction Junction. But then you have Isaac. Isaac is actually a very well-adjusted individual. He reacts with appropriate horror to things like Alice's finger collection or Franklin's experiments to revive the dead with science, and the crimes against nature that Emily calls pets. Isaac is the Only Sane Man and The Only Voice Of Reason in the room.

The Only Sane Man is often relied upon as the Only Sane Employee. This character often ends up a Knight in Sour Armor. For a more horrific version, see Through the Eyes of Madness. For the sci-fi version, the Ignored Expert is your go-to guy. The comedy version will often end up being either a Butt-Monkey or a Chew Toy. If all the other characters are otherwise sane, and really should see something, but only one guy does, he's an Einstein Sue. See also Cassandra Truth, Surrounded by Idiots, and Surrounded by Smart People; contrast with the Unfazed Everyman. May temporarily overlap with What the Hell, Hero?.

If several characters take turns being the Only Sane Man, they're playing with a Sanity Ball. If it's a two-person show, with one person playing the Only Sane Man to the other's wackiness, it's a Straight Man and Wise Guy scenario. This trope is the savvy half of a Savvy Guy, Energetic Girl duo, one third of a Comic Trio, and part of the Four-Man Band. If they're only later proven right, it may be The Dissenter Is Always Right.

Usually, but not always, a Cast Full of Crazy contains an Only Sane Man. Usually, he's prone to Sanity Slippage. Sometimes, he's Only Sane by Comparison, and in more "normal" casts he'd be considered the craziest of them all.

No Real Life Examples, Please! - Real Life does not have only one sane person.