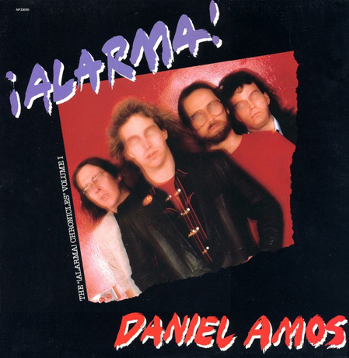 Left and right, the killers, crazed in stereo / Their words are like bullets from the radio...
Alarma!
Somebody's crying
Alarma!
Somebody's dying
Alarma!
Somebody's turning away...
— "¡Alarma!"
Had Alarma! been released in the general market, it would have slotted nicely alongside XTC or Devo, but Christian music buyers had no frame of reference for the music whatsoever, let alone the fact that it was coming from a band who'd previously given them songs with titles like "Posse in the Sky" and "Jesus is Jehovah to Me."
— J. Edward Keyes, An Athiest's Guide to Christian Music

¡Alarma! (The Alarma Chronicles Volume I) is Daniel Amos's fourth studio album, and their second New Sound Album: this time, signaling their transformation into a New Wave Music band.

On their previous album, Horrendous Disc, DA had abandoned Country Music for rock. Since then, Punk Rock had irrevocably altered the mainstream musical landscape. Many Christians dismissed punk and its offshoots as "nihilistic" and worthless, but DA found themselves listening to a lot of Elvis Costello and Talking Heads and hearing great potential in this new musical frontier. The band decided they wanted to record music in what was then the most cutting-edge and groundbreaking genre of rock music, and incorporate a Christian message into it. They knew what their next album had to be.

The album production was very Post-Punk: a distinctly "thin" sound, with the treble emphasized and the bass turned way down. (Almost like a wailing alarm...) Oddly, DA kept several aspects of their prior styles—like their '70s pop melodies and falsetto vocal harmonies—and fused them with this new style. They also had strange little throwbacks like the country-ish "Props" and the Surf Rock tribute "Endless Summer".

The lyrics were every bit as incendiary as the music. DA intended the album to be a wake-up call for American Christians, so most of the songs were razor-edged satire of their shortcomings: their hypocrisies, double-crossings, and lack of concern for the downtrodden. To further drive the point home, the liner notes featured a story by frontman Terry Scott Taylor

, in which his Author Avatar dreams about visiting a decaying city that embodies a twisted parody of the church's flaws.

¡Alarma! hit the shelves in 1981note mere weeks after the release of Horrendous Disc, owing to that album's ludicrous three-year delay. For the old guard of the Daniel Amos fandom—who preferred DA's country albums and felt Horrendous Disc was a horrendous betrayal—this album was the final nail in the band's coffin. But DA pressed on and rebuilt their fan base from almost nothing. And for those new, very loyal fans, this album was the start of something amazing.

DA promised that ¡Alarma! was just the first part in a four-album series. The second album in the series would come out in 1983: Doppelgänger.

Other versions
1991 CD reissue: has the original tracklisting, plus three bonus tracks: