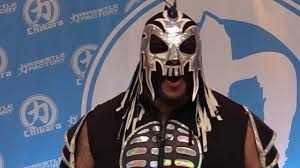 Crossbones is an American Professional Wrestler known for his time in CHIKARA. He debuted in 2004 and quickly joined Larry Sweeney's Sweet 'n' Sour International. He also competed for CZW and for C*4 Wrestling. His last appearance was at the 2012 CHIKARA Season Finale Under The Hood on December 2, 2012 (see He's Back below). He has never won a title.