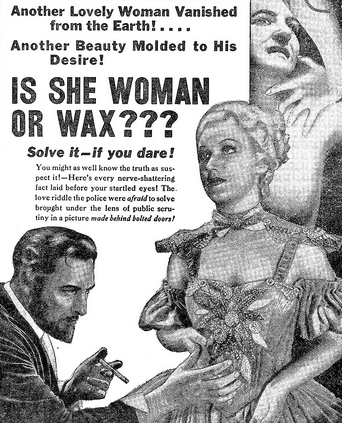 "Not even my skills in the plastic arts could create such perfect human figures! You'll be wax figures with real souls! Die in the name of art!"
— Mr. 3, One Piece
Advertisement:

The Wax Museum Morgue is a staple setting of the pulp horror movie. Often these things are run by fanatical sculptors who lost their skills at one point (either through disease or by accident) and had to turn to mad science as a way of regaining their ability to express themselves artistically. Never mind the fact that someone has to die for every eerily lifelike statue they produce. Oh no. They're not ones to let little things like morality and ethics stand in the way of their genius. Besides, these people aren't just being given death, they're being granted immortality as well, being forever preserved at the moment in life when they were at their most perfect, their most beautiful. Surely there could be nothing evil or insane about that...

Methods of preserving a human corpse in a Wax Museum Morgue may vary, but the most classic method is to simply coat a still-living body with a thin layer of wax... never mind that this would probably result in severe scalding of the victim, and that the gases released by decomposition would quickly render a person preserved in this way unsuitable for looking at unless they were part of a horror exhibition. Some more thoughtful madmen may pre-kill their victims and embalm them before dipping them in wax. Or sometimes, the madman will use just plain old taxidermy to stuff his victims, but any human preserved this way will usually wind up looking a lot rougher (having leathery skin, huge stitches, etc.,) than if they had been preserved by any other method.

Sometimes a Wax Museum Morgue may appear in a fantasy/sci-fi setting, in which case the fanatical "artist" will probably use some sort of magic petrification spell or Applied Phlebotinum to preserve their victims. If they happen to have art itself as a superpower, then their targets are pretty much screwed.

If the method of preservation involves a large laboratory filled with open vats of wax or chemicals, you can expect the villainous madman or his henchmen to wind up falling or tossing themselves into one of the vats at the end of the story. (They rarely get made into statues, though. Probably because the last and only people to possess the skill — or the desire — to do such a thing are now dead.)

Subtrope of Body in a Breadbox and Dead Guy on Display. Often incorporates Taken for Granite and/or the Uncanny Valley. Compare Taxidermy Is Creepy and Taxidermy Terror.

Later on, when he's pulled into the vat, he goes down with those very words.