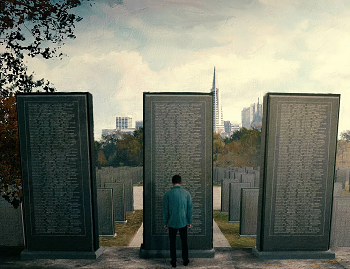 Half the universe snapped out of existence in a moment. The other half unable— unwilling— to move on.
Wars, battles, and skirmishes have taken place throughout all of history, and regardless of who won in the end, one thing was guaranteed: People will die. In order to honor the dead, and enlighten people in hopes that such a tragedy never happens again, many civilizations choose to erect monuments and memorials dedicated to the fallen.
Advertisement:

Most modern monuments pay respects by listing off the names of each soldier, while others may be set up to honor the battle itself, regardless of how many died, and some honor anonymous "unknown soldiers." It doesn't even have to be a battle either. There are monuments dedicated to victims of acts of terrorism and natural disasters as well.

Please limit to only In-Universe examples. It's fine to mention that one exists, but adding why it exists or how it is relevant to the plot is even better.