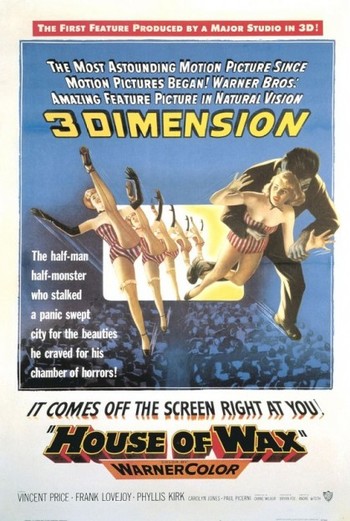 Jarrod: I'm going to give the people what they want: sensation, horror, shock... Send them out in the streets to tell their friends how wonderful it is to be scared to death.
Advertisement:

House of Wax is a 1953 American horror film starring Vincent Price, whose career then took a turn primarily towards horror films.

A remake of Mystery of the Wax Museum (1933), this was the first 3-D color feature film from a major American studio, following the independently-produced Bwana Devil the year before; these two movies together sparked the 3-D Movie boom of the 1950s (interestingly enough, this film's director, Andre De Toth, was blind in one eye and thus couldn't see the effect).

Price plays Professor Henry Jarrod, a devoted wax sculptor with a museum in 1910s New York. When his greedy financial partner, Matthew Burke (played by Roy Roberts), suggests that they burn the wax museum down in order to get the insurance money, Jarrod tries to stop him, only to be beaten unconscious and left for dead in the burning museum. Escaping with intense burns that leave his hands half-crippled and himself horribly disfigured, Jarrod enlists the aid of a deaf-mute sculptor named Igor (played by Charles Buchinsky, who would soon become better known as Charles Bronson) and builds a new House of Wax that showcases historical and contemporary crimes, including the murder of his former business partner. However, all is not what it seems in Jarrod's wax museum, and a friend of Burke's fiancée Cathy (played by Carolyn Jones) is about to make a horrifying discovery...

Another remake was released in 2005, also called House of Wax, though it borrows more plot elements from Tourist Trap than from this film.

The film is also the Trope Namer for Paddleball Shot.