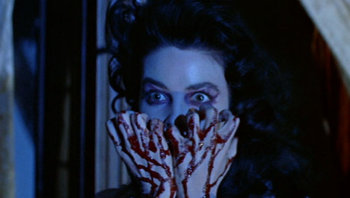 In early 19th-century Massachusetts, handsome young Phillip Winthrop (Mark Damon) arrives at the crumbling Usher mansion to see his fiancee, Madeline Usher (Myrna Fahey). He runs into an obstacle in the person of Madeline's brother, Roderick Usher (Vincent Price). Roderick at first insists that Madeline is too ill for Phillip to see. When Phillip finally succeeds in getting in to see Madeline, she seems perfectly fine, and she agrees to go back to Boston and get married. Roderick refuses to let his sister leave, and eventually tells Phillip why: the Ushers are "tainted", a family of evil—murderers, slave traders, maniacs. Roderick and Madeline are the last of their family line, and he is determined that the house of Usher will go extinct, no matter what.

House of Usher represented a major leap in artistic ambition for Corman's company, American International Pictures. It was the first of eight Poe adaptations between 1960 and 1965 directed by Corman and starring Vincent Price.