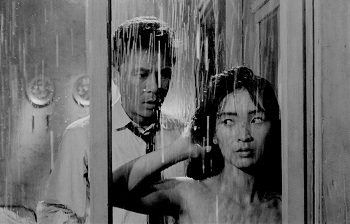 This is a bad idea.
Advertisement:

The Housemaid (하녀, Hanyeo) is a 1960 South Korean film directed by Kim Ki-young.

Dong-sik Kim (Kim Jin-kyu) is a composer who teaches piano to the workers at a Korean textile factory. His wife, Mrs. Kim (Ju Jeung-ryu), has been pushing for a bigger house and has been doing piece work on a sewing machine to help increase the family income. This work and her advanced pregnancy have left her too tired to keep house and look after their two children, so the Kims decide to hire a housemaid.

One of Dong-sik's students, Kyung-hee (Um Aing-ran), has a crush on him. She enlists her roommate at the factory, Myung-sook (Lee Eun-shim), to take the job as housemate to the Kims. Myung-sook winds up seducing Dong-sik and becoming his mistress. A tale of lust, obsession, blackmail, and murder ensues, as Myung-sook tries to claim Dong-sik for her own.

This film, made only seven years after the end of The Korean War, is a milestone in post-war South Korean cinema. Kim Ki-Young remade this film under the title Woman of Fire in 1971 and again in 1982. Director Im Sang-soo made another remake, a looser adaptation also titled The Housemaid, in 2010.