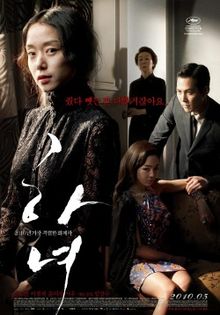 The Housemaid (Hangul: 하녀; hanja: 下女; RR: Hanyeo; MR: Hanyŏ) is a 2010 South Korean melodramatic thriller film, The Remake of a film of the same title made in 1960. Eun-yi has been hired as an au pair and maid to the well-off Goh family, in particular since the woman of the family, Hae-ra, is pregnant with twins. Eun-yi falls in love with the family, in particular their daughter, Nami, but is also seduced by Hoon, the husband. After she becomes pregnant by Hoon, her attempts to leave the family with her child are opposed by the increasingly murderous women of the family.

The Housemaid was directed by Im Sang Soo.