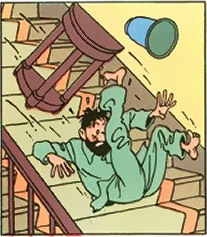 Stairs can be dangerous if you misstep and fall down, even worse depending on how long it is. Still, it can be funny, especially in cartoons. Obviously Truth in Television (and unfortunately not nearly as funny).

This is one of the common ways a Fright Deathtrap is used to kill someone. It can be caused by a case of Mind Your Step, but there are plenty of ways to misstep and fall without the stairs containing a trap or problem.

See also Death by Falling Over (a possible result of this), Mind Your Step (a possible cause) and Surprise Slide Staircase (on which people don't accidentally lose their step because the staircase does it deliberately). Creatures or devices that can expect this every time they attempt to use stairs, fittingly enough, Can't Use Stairs.

When Godbrand dismisses Carmilla in his anger, she kicks his down a lengthy flight of stairs.

When Godbrand dismisses Carmilla in his anger, she kicks his down a lengthy flight of stairs.