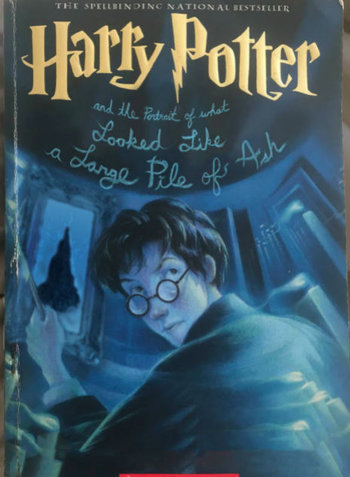 Magic: it was something Harry Potter thought was very good.

, who created it by feeding the seven original Harry Potter novels to a text-predicting keyboard and following its lunatic suggestion all the way.

Only Chapter Thirteen of the book, The Handsome One, actually exists — so far. As far as can be parsed, it features Harry, Ron and Hermione fighting off a group of not-that-threatening Death Eaters on top of Hogwarts Castle, and the celebration that follows. While this basic plot arc can more or less be followed, most of the story makes absolutely no sense whatsoever.

And no, no portrait of what looks like a large pile of ash appears in "The Handsome One."

See also the unofficial sequels Harry Potter and the Rest of the Sentence and Harry Potter And No One In Particular; Welcome to Sand Hands, a Give Yourself Goosebumps parody also created by Botnik Studios, and Coveralls, a parody of The X-Files by Botnik Studios. ProZD reads the whole thing (in multiple character voices) here

, and YouTuber Smashiell created an Animated Adaptation (and several sequel episodes) over here