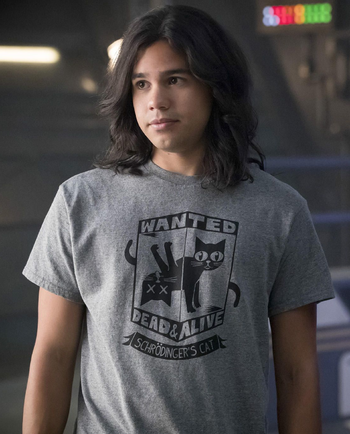 "'The Angels have the phone box.' That's my favourite; I've got that on a T-shirt!"
— Lawrence Nightingale, Doctor Who, "Blink"
Advertisement:

I Described Fun T-Shirt Here and all I got was this lousy T-shirt.

A T-shirt with a funny phrase or image. People in fiction and Real Life love to wear these.

The Law of Conservation of Detail dictates that there be a clear reason for having it on a character. Often, the shirt is there just to draw a comment about the shirt. It is also a shortcut characterization for the person wearing the shirt as a person with a sense of humor, particularly about their appearance. Or just, plain Rule of Funny. For maximum cheese, make the shirt promotional merchandise.

A Super-Trope to And All I Got Was This Lousy T-Shirt. A Sister Trope to Goofy Print Underwear. Compare "Kiss the Cook" Apron. See also Comical Coffee Cup, often used to a similar effect.

Havoc goes out of his way to have made fun family vacation shirts, much to his wife's and daughter's chagrin.

Havoc goes out of his way to have made fun family vacation shirts, much to his wife's and daughter's chagrin.