Literature / Give Yourself Goosebumps 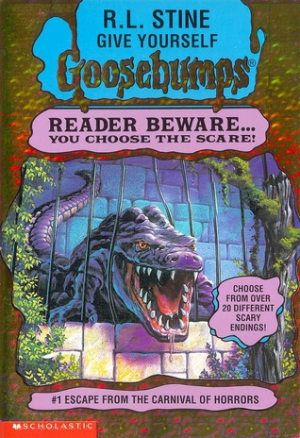 Give Yourself Goosebumps is the Gamebook spin-off of R. L. Stine's popular Goosebumps series.

For '90s kids, this series was the first (or, if one avoided the Animorphs Alternamorphs books, perhaps only) exposure they'd had to the Choose Your Own Adventure genre. Like other books in the genre, you, the reader, are required to make potentially dangerous choices to escape whatever dire circumstances you find yourself trapped in. Depending on the book, this may involve fleeing a haunted house, a deceptive genie or escaping a carnival of horrors (i.e., the book pictured to the right). And of course, the possibility of lots and lots of grisly deaths.

Most GYG books follow a format which splits the adventure into two separate paths. The primary one covers the book's advertised premise more closely. The secondary one usually centers on the aforementioned premise as well, but may focus on a different aspect of the quest. For example, the first book, Escape from the Carnival of Horrors, has you either going through the carnival games and earning enough points so you can leave safely, or going through the carnival rides and hoping one of the rides will lead you to the exit. Other books have two different storylines only tangibly connected to each other. Zapped in Space (#23), for example, has you choosing between the advertised virtual reality space adventure or another virtual reality game, which involves a trek through a snowy tundra to hunt down an Abominable Snow Woman. Few books, like Checkout Time At the Dead-End Hotel (#27), go so far as to focus the entire book on one central quest.

In terms of overall design, Give Yourself Goosebumps doesn't deviate much from its spiritual CYOA predecessors, other than including references to other Goosebumps books. Usually, this involves a quiz question of some sort, though Return To Terror Tower and Revenge of the Body Squeezers continue where the original books left off (i.e., A Night in Terror Tower and series 2000's Invasion of the Body Squeezers).

Because publishing company Scholastic forced R.L. Stine to write many volumes of Goosebumps in a short period of time — like the main series itself — it's likely that several ghost writers wrote some GYG installments. As a result, the novels really vary in quality. Demian's Gamebook

, despite his obvious negative bias toward the series, does a decent job showcasing the erratic quality between each book. In contrast, a livejournal blog by MJN SEIFER

gives more detail and compassion for the series. However, it's not quite complete yet (it's only on book #37), and has not been updated since October 31st, 2012. Nevertheless, most GYG books are worth reading at least once, though some books feel more tightly constructed and exhibit better gameplay than others.

Give Yourself Goosebumps lasted long enough to even have several Special Edition books. These eight CYOA novels emphasize inventory management and more complex gameplay gimmicks not present in the other books. Into the Jaws of Doom is the most notable example. With its split sections and chance encounters requiring dice rolls, it's the closest thing the series has to an actual gamebook. The other Special Edition books aren't as boldly ambitious, but they have other ways to surprise readers.

If you're interested in trying the series, many of the early books are now available on Amazon Kindle on the cheap.

The other wiki also listed the entire catalogue

of Give Yourself Goosebumps novels.

The Special Edition series consists of:

Give Yourself Goosebumps provides examples of the following tropes:

open/close all folders
In general
#14: The Creepy Creations of Professor Shock
#22: Return to the Carnival of Horrors
#33: It Came from the Internet
Your life has been forever ruined by TV Tropes. Looks like this is
THE END