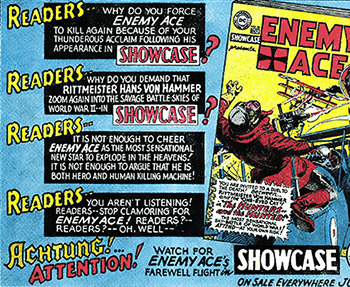 And you support this endeavor by buying his book?!
"But I guess calling it 'Hunter/Gatherer of Innocent Young Dinosaurs Pathetically Mewling Their Last as the Memory of Their Mother's Warmth Drifts Away to Be Replaced by the Unforgiving Coldness Of...' oh, fuck it; let's just call it 'You Bastard'."
— Ben Croshaw (reviewing Monster Hunter Tri), Zero Punctuation.
Advertisement:

So there you are, reading a book or playing a game. Within the media, whatever it may be, is some rather illegal and immoral action. Violence, murder, mayhem, general chaos. It's all very enjoyable and so much fun. Then suddenly something happens to make you question how right you are to enjoy this socially unacceptable behavior. Perhaps the characters start musing about what kind of warped mindset would possibly enjoy this. Or maybe they just outright smash through the fourth wall and tell you exactly what they think of you.

Or alternatively, maybe what you're watching/reading/playing has some kind of political message — perhaps it deals with famine or suffering in impoverished nations, or the rise of fascism, or some other example of how Humans Are Bastards. And then the same thing happens — the characters basically turn around and tell you that this is all your fault: "You Bastard, why the hell are you enjoying this?!"

And you're left to wonder in shame. Or, perhaps, confusion.

This works especially well in video games, in which murder and theft are the generally accepted ways to advance, without thought to moral consequences. If done well, it can be thought-provoking and unsettling, giving the reader / viewer / player pause to consider the moral implications of what they may have previously considered just a bit of fun. It may prompt them to examine both their motivations in reading this and the motivations of the hero — who, if they engage in numerous acts that would be condemned if done by anyone else, may look less and less heroic.

If done not-so-well, however, it can be quite Narmy and Anvilicious... And also somewhat hypocritical. After all, if the viewer is a bastard for passively enjoying this great evil, then what does that say about the producers, who ultimately are actively churning out and exploiting said evil for profit? What does that say about the creators who claim moral superiority by artificially creating a scenario, then getting offended that player did exactly what was expected, when, really, all the violence, pain, death, and suffering is on the part of the creator? And aren't other games really to blame for drilling the "everything is a target" and "your orders are absolute" messages into players' heads for 30 years?

Not to be confused with accusing someone of being born out of wedlock.

Compare My God, What Have I Done?.

open/close all folders
Anime & Manga
Comedy
Comic Books
Films — Live-Action
Literature
Live-Action TV
Music
Poetry
Pro Wrestling
Religion
Tabletop Games
Theater
Visual Novels
Web Comics
Web Original
Western Animation
Real Life
So you've read the whole thing, haven't you? By wasting your time reading this page made up of zeros and ones that only matter to evil nerds, instead of donating to charity or reading a book, you have killed THOUSANDS of starving Somali children by reading trivia for fun. I HOPE YOU'RE HAPPY!
Feedback

Alternative Title(s): You Bitch, You Bastards