Film / The Wizard of Gore 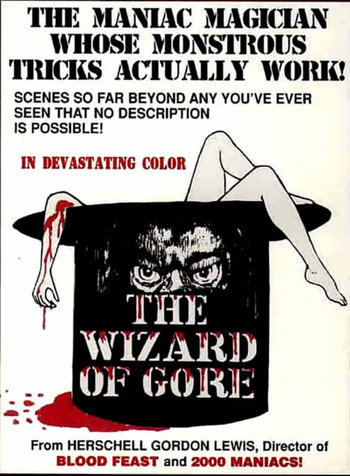 An existentialist Gorn movie by Herschell Gordon Lewis, previously known for Blood Feast, A Taste of Blood, and The Gruesome Twosome, The Wizard of Gore follows Sherry Carson, a TV Show host, and her fiance, Jack, as they try to unravel the mystery of Montag the Magnificent, a stage magician whose volunteers wind up dead after the show in a fashion identical to their on-stage "death".

The special effects were horrifically bloody for their time but have not aged well. The acting is amateurish. The movie delights in twist after twist. But overall, it is not an experience to be missed.

In 2007, a remake was made with Crispin Glover in the role of Montag the Magnificent.