Saw a Woman in Half 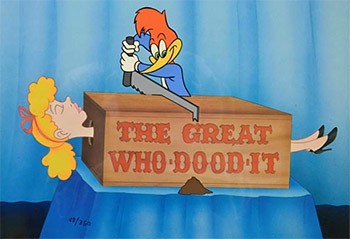 Almost as famous as the Pull a Rabbit out of My Hat trick, this death-defying Stage Magician trick involves a pretty woman (usually the magician's Lovely Assistant) being placed into a coffin-sized lidded wooden box, with a neck-hole in the top and ankle-holes in the bottom. Then, producing a large floppy hand-saw, the magician proceeds to saw through the box, through the woman's midsection, and through the table on which the box is resting. After that, the magician shoves in a pair of bizarre rectangular blades (sometimes called dividers) through the middle.

Then, if nothing unseemly has happened at this point, the magician pushes away the two halves of the table, possibly rotates them around (but carefully not showing the sawn ends to the audience) and moves them together again. And then the woman steps out of the reunited box, all in one piece, to the relief and applause of the audience.

Modern variants of the trick often skip the saw and use the rectangular blades instead, which are shoved in side by side. This has the advantage of allowing the magician to show the "cut" ends to the audience. Because it's a Discredited Trope by now (the secret has been explained on countless occasions), a Stage Magician who tries this is pretty much required to have some kind of special or unique variation if he wants to be taken seriously.

Sometimes, the second rectangular blade can get stuck and the magician will pull on the head of the assistant, causing the blade to fall. This is used as a joke on several occasions. A few magicians who love their Black Comedy may have some 'unusual' embellishments to the act: The assistant may fake falling unconscious, shriek when the blades go through her, and on some rare occassions the blades they use have fake "bloodstains" on them when they are withdrawn from the boxes during the restoration. A few might even add fake blood fountains gushing out dramatically as part of the act. Sometimes the dividers get stuck, and the magician has to either take hold of her head or feet and pull, although this gimmick is usually considered tired and is often parodied instead of played straight (at least one version of this black comedy element has the girl able to force the dividers to rise in their slots by straining really hard out of indignation at the magician's rudeness at pulling her hair to get the dividers unstuck).

The reasons for its notoriety are explained in detail by The Other Wiki.

Other stage illusions closely related to this classic include the Zig-Zag Lady (Where the girl in the box is divided by having the box slide apart along several pre-determined division points, producing a signature zig-zag shape) and Mis-made Girl (Where the Girl goes into a box that is divided into four parts and the magician initially "accidentally" scrambles her during the first attempt at restoration). Another related trick is instead of cutting the box into pieces, the box is impaled with multiple swords to the point where it looks like it shouldn't be possible for the person inside to avoid all of them. Sometimes both tricks are done at the same time by cutting the box in half and then impaling the two halves.

If this results in someone actually getting cut in half, then he's Half the Man He Used to Be.