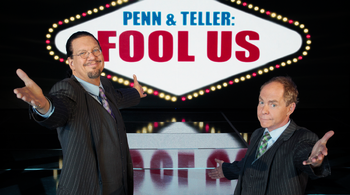 Penn & Teller: Fool Us is a magic competition show that first ran on ITV before being picked up by The CW. It was originally hosted by Jonathan Ross (Seasons 1 & 2) and is currently hosted by Alyson Hannigan (Seasons 3-present).

The show's premise is simple: magicians come onto the show and perform a trick in front of the eponymous duo. Penn & Teller then have to figure out how the trick was performed. If they are fooled, the magician then gets to perform their act as an opener to Penn & Teller's long-running Las Vegas stage show.

Each episode ends with Penn and Teller themselves performing a trick for the audience.

Latex Perfection on "Penn and Teller's Fool Us"

You can even change race using a rubber mask and gloves...

Latex Perfection on "Penn and Teller's Fool Us"

You can even change race using a rubber mask and gloves...