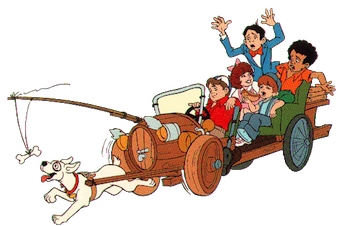 "Sit down, Alfalfa, and enjoy the ride!"
Hanna-Barbera and King World co-produced this Saturday Morning Cartoon for ABC, based on the Our Gang theatrical shorts, as part of a 90-minute omnibus with Pac-Man and Richie Rich (1980). Its voice cast included Peter Cullen, Patty Maloney, Julie McWhirter Dees, Scott Menville, Shavar Ross and BJ Ward.

Hanna-Barbera artists Iwao Takamoto and Bob Singer created the character designs by tracing photographs of the actual Our Gang child actors. This technique was previously used for the studio's animated spin-offs of The Harlem Globetrotters and Happy Days.