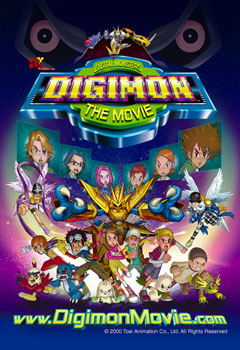 ''When the DigiPast and the DigiPresent collide, time to DigiSize!''
"Who says there's no such thing as monsters?"
"I'm looking for the programmer, don't interfere!"
Advertisement:

Taking place over a span of eight years, the movie chronicles the first appearance of Digimon, The Internet meltdown and near-nuclear holocaust caused by Diaboromon, and the fight between the cast of Digimon Adventure 02 and a mysterious Digimon named Kokomon.

The first two chapters of the movie (Digimon Adventure and Our War Game) were under director Mamoru Hosoda, who went on to make several well-acclaimed films including Summer Wars.

The rest of the Digimon movies would later be dubbed as well, though unlike this movie, were all kept in their separate entries. They were only shown on Toon Disney with no DVD releases.