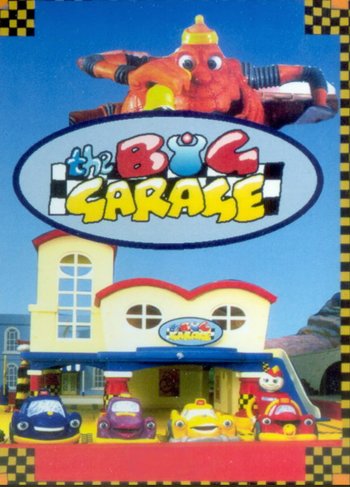 At the top: Scrap. At the bottom, from left to right: London, Zigzag, Yorky, Pump, and Mimi
Advertisement:

The Big Garage is a Canadian puppet show aimed at preschoolers, which aired from 1995 to 1996 on Family Channel and Global Television Network in Canada.

The setting of this show is Taxitown, where the eponymous Big Garage is. Said garage is home to four taxi cabs, London, Yorky, Zigzag, and Mimi, who are always under the watchful eye of Pump, a gas pump who serves as their mentor. Close to the Big Garage is Scrapland, a scrapyard serving as the home of an anthropomorphic trash compactor named Scrap who wants to destroy the taxis. Scrap's helper, a tow truck named Rusty, alternates back and forth between being an enemy of the taxis and a friend.