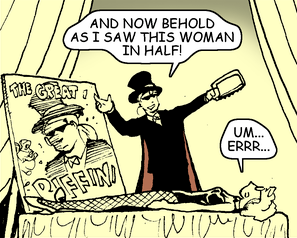 Any character who is not normally a magician, but is putting on a magic show, will use a stage name formed by taking their name and appending "-ini". Often they'll prefix "The Great", as well.
Advertisement:

Obviously the inspiration for these names is Harry Houdini, who himself based his stage name on French magician Jean Eugene Robert-Houdin, or possibly Cardini. Never mind that Houdini considered himself an escape artist, not a magician, and never presented himself as having magical powers rather than exceptional dexterity.

Not to be confused with the 1980s rap group, though they were great.