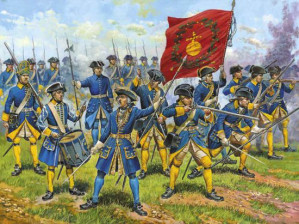 , giving a perfectly accurate summary of Charles XII's personality.
"We have just been given an insight into the Russian mind and soul. It will be most valuable, provided we do not die from it."
—Charles XII upon coming across a village where the Russians have performed scorched earth style tactics.
Advertisement:

The Great Northern War was a series of battles fought to contest the Supremacy of the Swedish Empire in Northern, Central and Eastern Europe. It originally pitted Russia, Denmark-Norway, Poland-Lithuania and Saxony against Sweden. The result was a bloodbath that saw Poland switching sides twice (both cases saw the election of a new king), Russia to modernize under Peter I (aka Peter the Great) and the death of the Warrior King, Charles XII and the empire he built with it.

Four treaties ended the conflict as Sweden made peace with Great Britain and Hanover in 1719, with Prussia in early 1720, with Denmark in July 1720 and with Russia in 1721. Humiliatingly Saxony-Poland, one of the powers that started the war, did not get a treaty of its own and would have to wait years for peace with Sweden to be formalized. In the end Russia gained Karelia, Ingria, Estonia and Livonia (essentially the area around and to the north of St. Petersburg, Estonia and part of Latvia). Prussia gained part of Swedish Pomerania (in the coastal region on the modern German-Polish border)note  It gained the rest in 1815, Hanover the duchies of Bremen and Verden (in modern-day Lower Saxony), and Denmark the part of the duchy of Schleswig which up until the war had been ruled by the Duke of Schleswig-Holstein-Gottorf.