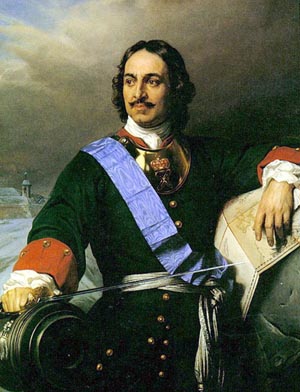 "It is my great desire to reform my subjects, and my great shame that I cannot reform myself."
— Peter the Great (Пётр Великий, Pyotr Velikiy)
Advertisement:

He ascended the throne of Russia as a co-regent to his physically and intellectually disabled brother Ivan V. After winning a battle for political dominance with his sister Sophia, he triumphed as the undisputed leader of Russia. Then he left the country and travelled to the West to learn its science and technology, and returned as an accomplished ship-builder.

After winning some wars with Turkey and Sweden, Peter the Great annexed lands neighboring two seas, the Azov Sea and the Baltic Sea. Then he founded St. Petersburg, an European-inspired city that was meant to be a capital of the future Russian Empire.

Peter's reforms after that meant basically gradual dismantling of the old Muscovite Tsardom and the creation of a new state, the Russian Empire. He introduced a new legal mechanism, the Table of Ranks, that provided a chance for talented and lucky commoners to make it into nobility, created many new noble bloodlines and conducted many other reforms. Most notoriously, he implemented a "beard tax" that required Russian men to either pay an annual fee to keep their beards (which were considered signs of piousness in Russia at the time, but were comparatively unfashionable in western Europe), or have them shaven off, often by force. Modern Russian culture, economy and politics are full of things introduced by Peter the Great: he invented the modern form of the Cyrillic alphabet, started printing newspapers, built the first heavy industries, taught Russians to drink coffee and smoke tobacco, and many, many more.

Eventually, his claim of imperial status was recognized by foreign powers, and Russia officially became an empire in 1721. He died of cold after rescuing a soldier from one of early St. Petersburg's many deluges caused by tidal activity and unpredictable winds. The Russian Empire founded by him was one of the world's superpowers until Red October, and he was a cult figure in Russia until the late 19th century, when the more conservative Muscovite-esque political ideas reached dominance.

Had a dysfunctional relationship with his son Alexei.