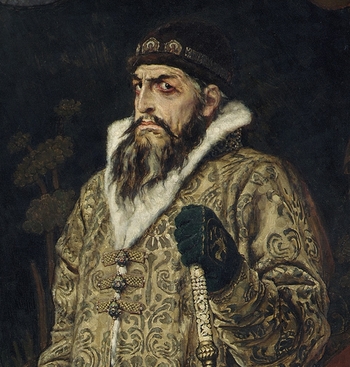 Ivan IV Vasilyevich (August 25, 1530 - March 28 or 18 (OS) 1584), also known as Ivan the Terrible, Ivan the Formidable, or Ivan the Fearsome who was the Grand Prince of Moscow (1533-1547) and 1st Tsar of Russia (1547-1584). His most known epithet, 'Ivan the Terrible', comes from the fact that throughout his rule, he was known as a man who was dangerous, powerful, formidable and inspiring fear or terror (positive interpretations include being courageous, magnificent, magisteral, keeping his enemies in fear but his people in obedience), which matches the archaic meaning of 'terrible' (or in Russia, 'grozny', his name and epithet were spelled as 'Ivan Grozny' in native tongue) instead of the modern meaning (defective and evil).

After a conquest of the Khanate of Kazan and the Khanate of Astrakhan, he consolidated power and got rid anyone who would threaten his power and went on to rule Russia with full control, supported with his personal bodyguard groups dubbed the 'Oprichnik', who did their best to silence and oppress any possible oppositions to his rule in the shadows... that is until they had a falling out for not responding to Ivan's questions about a sack in the area of Tartar. Hence, afterwards, discussing members of the Oprichnik (dubbed 'Oprichnina') was considered a capital offense by Ivan himself.

Ivan is also subject to controversy on his mental state, as he infamously killed his oldest son and kicked his pregnant daughter-in-law, causing her to miscarry, leaving problems with the line of succession. These controversies, however, are merely coincidental with why he's called 'Ivan the Terrible' in the first place, as stated above.

He died in 1584 of a stroke and the throne was left to his son, Feodor, who later died without an heir, leading to the end of the Rurikid dynasty and the succession crisis known as the Time of Troubles, after which the Romanovs would enter the picture.

Media about Ivan the Terrible: