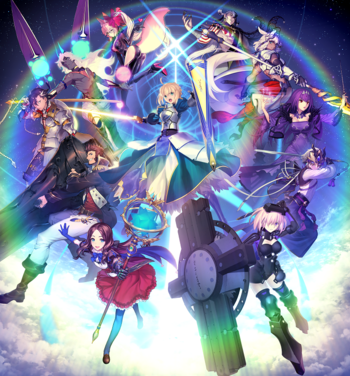 We ask of you: are you our Master?note Clockwise from top: Ashiya Douman (Alter Ego), Caenis (Lancer), Scáthach-Skadi (Caster), Prince of Lan Ling (Saber), Mash Kyrielight (Shielder), Altria Pendragon (Saber), Leonardo da Vinci (Young) (Rider), Napoléon Bonaparte (Archer), Mandricardo (Rider), Arjuna (Alter) (Berserker), Koyanskaya of Light (Assassin). Not Pictured: The Three Hundred-Plus Other Servants.
Advertisement:
O Lord... I shall raise my flag once again for the salvation of this nation... Nay, for the salvation of this world. All things righteous have burned away. All that is holy has died. Within a mere second, our future was taken from us.
Hear me! O, Heroic Spirits, mighty warriors who have gathered here. Though we may be rivals, we must stand together now.
My True Name is Jeanne d'Arc. In the name of our Lord, I shall become your shield! This battle will be a long journey that takes us back through human history. However, there is no need for despair. There are thousands of encounters waiting for you.
Even if this entire planet becomes a battleground for the Holy Grail War. Even if everything on this land turns into eternal ruinous grounds. Even if powerful enemies await us at the end of our journey... Our fate has not yet been decided. So, let the battle begin, Master.
— Jeanne d'Arc's speech from the first PV

Fate/Grand Order is a mobile phone game entry in the Fate franchise, developed jointly by Type-Moon and Aniplex subsidiary Lasenglenote DelightWorks was formerly responsible for development from 2014 to 2021 before its gaming division was acquired by Aniplex in December 2021, and was rebranded into Lasengle in 2022. DelightWorks no longer holds any stake in development going forward. and published in cooperation with Aniplex, as part of the larger Nasuverse. It is a re-imagining of the original Fate/Apocrypha game project, before it became a novel series, and takes place in a somewhat alternate timeline to the main Fate/stay night game. As a result, characters from all over the Fate Series make an appearance here.

It was released in Japan on Android on July 25, 2015, and iOS during August of the same year. An English version was announced in April 2017 and launched in the United States on June 25, 2017, later becoming available in Australia and Southeast Asia. The game has also been released in China, Taiwan, and South Korea.

The Chaldea Security Organization is a secret organization dedicated to the preservation of the human race. With the intellectual and financial resources of the world behind them, Chaldea has melded technology and magecraft into the creation of numerous tools to aid in their mission; most notably the Global Environmental Model "CHALDEAS", an omniscient and complete simulation of Earth's past, present, and future. However, one day it suddenly becomes impossible to view more than one year into the future predicted by CHALDEAS, and the leaders of Chaldea conclude that humanity will soon face an impossible and unknown extinction event. Their researchers pinpoint the cause to a distortion within the space-time continuum, located in the Japanese city of Fuyuki in the year 2004. Chaldea gathers several candidates capable of using the Guardian Heroic Spirit Summoning System "FATE", a system that summons and weaponizes the legends of great historical, mythological, and fictional figures as "Servants". Their mission is to go into the past and stop the space-time distortion at its source by utilizing an experimental form of Time Travel developed by Chaldea, with the aid of FATE and their Servants.

Yet the secret lying within Fuyuki in the year 2004 is only the first step in a new Grand Order that sees you traveling across time and space, teaming up with (and facing against) the living legends of human history to fix the distortions warping the events of the past, and save the future.

Gameplay revolves around fielding teams of units called “Servants”, based on historical figures from fantasy and real life, in turn-based battles. Three can be on the field at any time, and the game lets you create teams of up to five Servants plus one support borrowed from another player. Each Servant has their various stats and abilities based on their real-life deeds, which are manifested in-game as Skills they can use to buff themselves, debuff enemies, gain resources, or otherwise change the course of battle. They also come with five attacks known as “Command Cards” that are shuffled into a deck of fifteen and are redistributed at the beginning of your turn, forcing you to choose three of the five distributed cards to attack. The cards are as follows:

Other mechanics include Chains, whereby selecting three cards of the same category adds a new effect based on the selected card type, Crit Stars that calculate your percentage for a critical hit, and the Noble Phantasm, a powerful Limit Break unique to every Servant. The aim of combat is to build a team of synergistic Servants that compliment each other using their Skills and what Command Cards they have in their deck. FGO is also notable for playing with the Character Tiers of the Servants on offer by making even the lower rarity characters usable and desirable, and the game is designed around every Servant having a defined niche in combat. The game incentivizes creating a diverse roster of Servants to handle a variety of situations over focusing exclusively on your most powerful units, which goes hand in hand with the themes of the story.

A Fate/Grand Order VR Experience drama featuring Mash Kyrielight and Altria Pendragon (for the "Another Story" segments) was released on December 6, 2017, in Japan. It was released in the west in early 2019.

A rhythm game, Fate/Grand Order Waltz in the MOONLIGHT/LOSTROOM, was announced and released in August 2020 as part of the game's fifth anniversary.