Anime / Fate/Grand Order - Divine Realm of the Round Table: Camelot 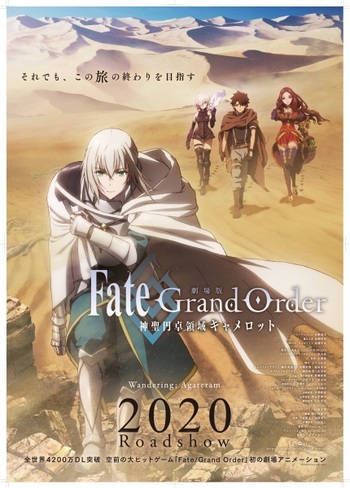 This is the tale of a certain knight.
This is the story of the mythology at the end of the world.
— Trailer 1
Advertisement:

Fate/Grand Order - Divine Realm of the Round Table: Camelot is a two-movie anime based on the "Camelot" chapter from the mobile game Fate/Grand Order. It is produced by Production I.G, and its first film, -Wandering; Agateram- was released December 5, 2020. The second film, -Paladin; Agateram-, was released on May 15, 2021.

In the present day, the Chaldea Security Organization, already struggling to reverse the incineration of human civilization, has located the sixth of seven disturbances in the space-time continuum. As the sixth singularity linked to humanity's destruction, Chaldea sends Ritsuka Fujimaru and Mash Kyrielight back in time to put an end to it and retrieve the Mage King's Holy Grail. Their journey takes them to the land of Jerusalem in the wake of the Ninth Crusade; however, things have gone horribly off-track, even by the standards of the incineration of humanity. A conflict over the Holy Grail has just concluded, yet the singularity will not close, instead being forced open by an unknown entity. It is up to Chaldea to retrieve the Holy Grail and ensure that the Singularity will resolve itself, which causes their goals to intertwine with the goals of a mysterious knight on a journey of atonement...

When Rhongomyniad was used against an anti-Altria village, a gravely wounded Arash steps up to save it by using his Noble Phantasm, Stella, to take out Rhongomyniad before it's too late.

When Rhongomyniad was used against an anti-Altria village, a gravely wounded Arash steps up to save it by using his Noble Phantasm, Stella, to take out Rhongomyniad before it's too late.