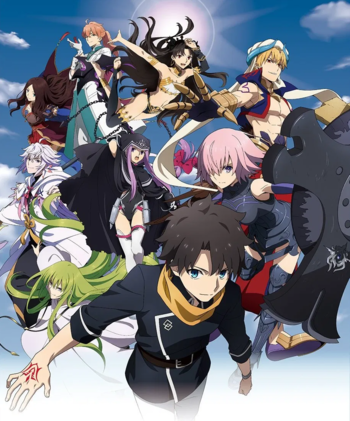 The Age of Gods - the final age when Mystics remain.
And the age when humanity and the gods part ways.
— Teaser trailer
Advertisement:

Fate/Grand Order - Absolute Demonic Front: Babylonia is a 21-episode anime based on the "Babylonia" chapter from the mobile game Fate/Grand Order. It is produced by CloverWorks, former sub-studio of A-1 Pictures (Fate/Apocrypha), and began airing on October 5, 2019. Episode 0, a prologue to the main story, premiered on August 4, 2019 via the Fate/Grand Order game app in Japan. Aniplex licensed the episode for North American territories through FunimationNow

, and for Australia and New Zealand through AnimeLab

The series is the first in a joint venture, through Sony/Aniplex, that involves Funimation, Wakanim and AnimeLab exclusively simulcasting the show for their respective territories

(with other services like Crunchyroll streaming it with a month long delay). The English dub began streaming from November 2, 2019

via Funimation's service who, as part of the aforementioned deal, have exclusive streaming rights to it for a year.

In the present day, the Chaldea Security Organization, already struggling to reverse the incineration of human civilization, has located the final disturbance in the space-time continuum. As the seventh singularity linked to humanity's destruction, Chaldea sends Fujimaru Ritsuka and Mash Kyrielight back in time to put an end to it and retrieve the Mage King's Holy Grail. Landing in ancient Babylonia at the dawn of human civilization, Chaldea teams up with an older, wiser, and calmer Gilgamesh to save his kingdom from hordes of demonic monsters and vindictive goddesses.