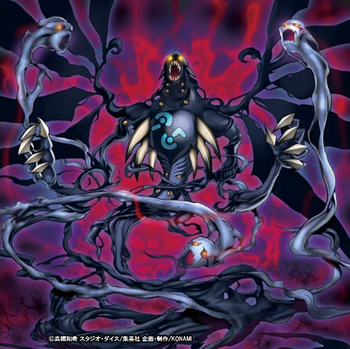 "I summon WTF-Eyes Eldritch Dragon!"
"And the dragon stood on the shore of the sea. And I saw a beast coming out of the sea. He had ten horns and seven heads, with ten crowns on his horns, and on each head a blasphemous name."
— Revelation 13:1, The Bible

Dragons are one of the oldest and most-ubiquitous mythological creatures, being featured in cultures around the world and generally being portrayed as enormous reptilian monsters and even as gods. On their own, dragons — particularly in Western folklore — are already unnatural and horrific: no natural vertebrate possesses six (if not more) limbs, and that's leaving out the ability to fly, breathe fire, and venomous breath and blood — though in some cases exposure to a dragon's blood bestows invulnerability and other mystical powers.

In modern fantasy, depictions of dragons often vary from them being powerful monsters that require whole parties of seasoned adventurers to be slain, to being benevolent and helpful beings, to being just another type of animal - even giving scientific explanations for their powers. Some depictions, however, cross over into Cosmic Horror Story and Lovecraft Lite territory and portray dragons as not just a mere species of animal or a generic (albeit powerful) type of monster able to be slain by mortal adventurers, but as calamitous and otherworldly abominations — or on the flip-side depict calamitous otherworldly abominations that choose to appear draconic.

This trope is Older Than Dirt and has its roots in "Chaoskampf" myths from cultures around the world — particularly Indo-European — where primordial chaos is generally deified as reptilian abominations that terrified even the gods.

A subtrope of Eldritch Abomination and Our Dragons Are Different. May co-exist with Animalistic Abomination, which is about otherworldly abominations in the shape of animals. Most likely to overlap with Dragons are Demonic, which emphasises dragons that are evil and/or infernal. Deific dragons aren't as likely to be considered abominable, though deities of chaos and destruction are often an exception. This is for dragons that are otherworldly horrors with features that "normal" dragons don't possess — i.e. multiple eyes, multiple mouths, multiple heads, multiple wings, multiple tails, tentacles, regenerative abilities that make them virtually or completely immortal, etc — and otherworldly horrors that appear as dragons because that's the closest puny mortals — and sometimes even gods — can come to perceiving them.

They can be considered as the embodiments of dragons due to being an Eldritch Being.

The Gaping Dragon was originally a normal Archdragon before the emergence of life corrupted it with a ravenous gluttony that mutated it into a horrendous acid-spewing abomination with a massive, grotesque Belly Mouth running from the base of its throat to its pelvis.

The Gaping Dragon was originally a normal Archdragon before the emergence of life corrupted it with a ravenous gluttony that mutated it into a horrendous acid-spewing abomination with a massive, grotesque Belly Mouth running from the base of its throat to its pelvis.