Visual Novel / a letter of challenge 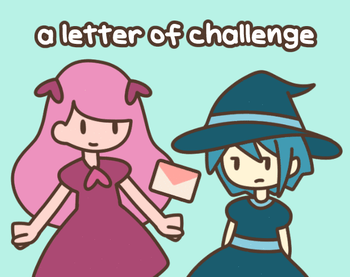 She arrives at the place where the letter invited her, and everything suddenly goes black. When the lights return, she notices that the sky has become purple, and her magical guardian isn't present. Another magical girl arrives and informs the protagonist that this is a space only magical girls could enter. The mysterious girl then starts to cast a spell, and regardless of what the player does, she succeeds at casting it. The player gets a game over screen, but don't be fooled: you just have to start the game again.

Everything starts with the protagonist having a conversation with her magical guardian yet again... until she starts to feel like they already had this exact conversation before.

a letter of challenge is a Ren'Py visual novel with some turn-based combat made in 2020 by npckc for the Turn-Based Games Jam. It's free and can be downloaded here

a letter of challenge provides examples of: