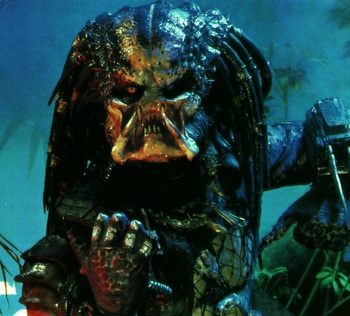 Mandibles: For when normal jaws just won't get the job done.
mandible
noun
1. the jaw or a jawbone, especially the lower jawbone in mammals and fishes.
2. one of a pair of mouthparts of an arthropod, designed for holding food.
Advertisement:

As Most Writers Are Human, we're typically most accustomed to dealing with other humans, or at least other vertebrates, and thus anything that deviates too much from that template falls into the Uncanny Valley. Even with animals we're used to seeing a two-part, one-on-top-of-the-other jaw system on everything from whales to dogs to birds.note All of which do have one mandible, incidentally: the hinged lower jaw, with the fixed upper jaw being properly known as the maxilla. So adding, say, arthropod-style mouthparts to the jaw system we're used to, or even replacing it entirely, is a quick and easy way to make something seem strange and other.

Monstrous Mandibles in fiction are typically found in four types.

For creatures where these are almost universal, see Insectoid Aliens, Big Creepy-Crawlies, and Predator Pastiche. Sub-Trope to Monster Mouth.