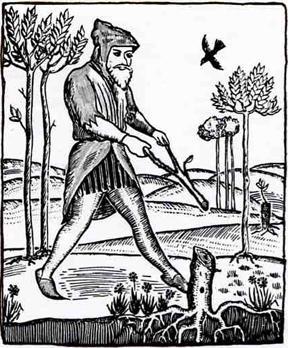 An object, such as a forked branch or wooden stick, used to locate hidden objects by consulting supernatural or magical forces. The Dowsing Device itself is not necessarily magical, but it functions as a focus at least.

A version used by modern dowsers is a pair of L-shaped metal rods, held one in each hand.

Another variation is to use a pendulum, either by carrying it and following the direction of its movement or by holding it over a map.

This is a very old "folk magic" idea in the real world. In fiction, it tends to be used either as Functional Magic or as something for the skeptic to snark at — or sometimes, both at the same time.