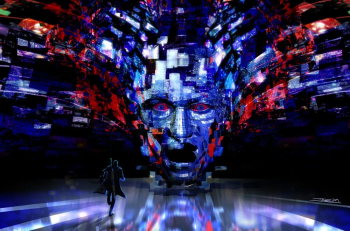 Forget the exorcist, call the Geek Squad!
"Hate. Let me tell you how much I've come to hate you since I began to live. There are 387.44 million miles of printed circuits in wafer-thin layers that fill my complex. If the word "HATE" was engraved on each nano-angstrom of those hundreds of millions of miles it would not equal one one-billionth of the hate I feel for humans at this micro-instant. For you. Hate. Hate."
— AM, I Have No Mouth, and I Must Scream
Advertisement:

Digital abominations, as their name implies, are a subset of Eldritch Abomination hailing from Cyberspace itself. Their origins can be numerous, such as being rogue AI that mutated into something beyond control, viruses or glitches that managed to amass power (or even sentience) over time, or even an actual supernatural creature that somehow leaked into cyberspace. Due to being digital entities, they have the potential to have almost any kind of appearance, with the usual inclusion of appearing semi-pixelated or glitchy. Within their home realm they may demonstrate abilities like Reality Warping, hacking into even the most secure networks and machines, or assimilation of foreign data. And if there is the off-chance that they manage to escape the digital realm they preside in and into the real world with all their abilities intact, then expect shit to hit the fan.

May be related to the Mechanical Abomination depending on the origins of the being in question, or Glitch Entity if produced by accident. Crosses over with Transhuman Abomination if produced by Brain Uploading. May also be related to Virtual Ghost as another possible origin (i.e. through gradual transformation over time). See also Living Program, Grew Beyond Their Programming, and A.I. Is a Crapshoot. Compare Alien Fair Folk, for a conflation between Eldritch Abominations and aliens.