Interface with a Familiar Face 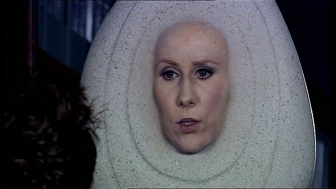 Donating your face for use as a library information terminal. It's like donating a park bench, except way creepier.
Advertisement:

When an artificial intelligence is given the face and voice of a real (in the fictional setting) human being, instead of a made-up face.

Distinct from Virtual Ghost and Replacement Goldfish in that the resemblance is only skin deep — the AI has its own name and personality, and is not meant to be a replacement for the person — although the decision to give it that face may have been influenced by sentimental reasons.

Also, this is usually not a case of the AI taking the place of the person it's modelled on; the model is usually still alive, and they will generally go on to lead separate existences. Nor is it usually a case of the AI being introduced as a Suspiciously Similar Substitute; in fact, in series fiction it's very common for the AI to appear first.

If the AI does appear first, and especially if it's a regular character, then the longer the series runs the more likely it becomes that the model will make a guest appearance. The odds of this happening are given a boost if the AI's creator did it without the model's knowledge.

Although the title we've given this trope puts the emphasis on computer interfaces, all of the above can also apply to androids.

Contrast Virtual Ghost and Brain Uploading, where the artificial intelligence is meant to be the same as the person it's copied from; all robotic forms of Doppelgänger; and A Form You Are Comfortable With.