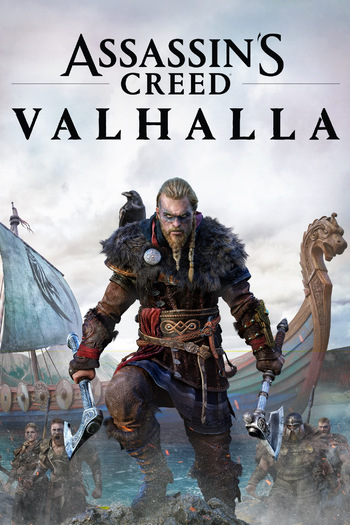 "Wars will rage. Kingdoms will fall. This is the age of the Vikings."
They are heartless, godless barbarians. They murder and kill blindly. They scar the lands of England. Lands they will never defend, never love. The time has come to speak to them in a language they will understand.
— King Aelfred the Great
Advertisement:

Assassin's Creed: Valhalla is a historical open-world Action RPG, the twelfth main entry in the Assassin's Creed series, and the first to be released on PlayStation 5 and the fourth generation Xbox consoles. It released on November 10, 2020 for the PlayStation 4, Xbox One, Xbox Series X|S, Google Stadia, and PC, with a PlayStation 5 coming on that console's launch on the 12th/19th. Jesper Kyd, the first composer of the franchise, returned for the soundtrack nine years after leaving the series with Assassin's Creed: Revelations. Also collaborating to the soundtrack are Einar Selvik of Wardruna fame, and Sarah Schachner, who composed for various games in the franchise; namely Unity and Origins.

The story is set in 9th century Europe during the Viking Age and centers on a Norwegian Viking warrior named Eivor (whose gender can be determined by the player) as they lead raids against the Anglo-Saxon kingdoms of England, including the Kingdom of Wessex led by King Aelfred the Great. It features the return of a usable Hidden Blade after it was mostly absent from Assassin's Creed: Odyssey.

A spin-off book titled Assassin's Creed: Valhalla - Geirmund's Saga was written by Matthew J. Kirby, who also wrote the young adult Assassin's Creed: Last Descendants trilogy of novels, the third of which followed Vikings in Scandinavia during the 10th century. It follows the son of Hjorr Halfsson and Ljufvina Bjarmarsdottir, Geirmund Hel-hide, as he attempts to make a name for himself in the Great Heathen Army, and was also released on November 10, 2020. A serialized manhua series titled Assassin's Creed Valhalla: Blood Brothers was released a few days before the game in China and will receive an official English-language release on August 10, 2021. The story is a prequel to Valhalla that focuses on the Stensson brothers fighting with Halfdan Ragnarsson and Ivarr the Boneless during the Viking invasion of England. Additionally, a three-part Dark Horse Comics miniseries titled Assassin's Creed: Valhalla - Song of Glory detailed the exploits of Eivor and Sigurd before their clan colonized England and established Ravensthorpe. The game will also receive a tie-in novel written by Mathieu Gabriella set for release in the fall of 2021, focusing on a Christian monk and an aspiring Hidden One traveling across Britain from the village of Ravensthorpe to the heights of Scotland. There will also be a Valhalla novel trilogy published by Aconyte Books. Eivor will also star in a children's book in the Mr. Men and Little Miss series.

Along with intermittent content updates, the game features two major story expansions. Wrath of the Druids (May 2021) sends Eivor to Ireland to quell a druid conspiracy threatening the island's political unification and economic expansion. The Siege of Paris (August 2021) heads into continental Europe as Eivor joins a barbarian coalition waging war against the Carolingian Empire. A third expansion, Dawn of Ragnarok, was released in March 2022, following Odin as he infiltrates Muspelheim to resurrect Baldr.

Like Origins and Odyssey, Valhalla features an educational "Discovery Tour" mode that goes deeper into the history and culture of the region and time period.

The following game, Assassin's Creed: Mirage, is a Spin-Off focusing on the youth of Basim in Abbasid Baghdad. It is due for release in Spring 2023.

The Raven Clan (led by Eivor) are a group of 9th century Norwegian Vikings who raid England and establish a small settlement known as Ravensthorpe.

The Raven Clan (led by Eivor) are a group of 9th century Norwegian Vikings who raid England and establish a small settlement known as Ravensthorpe.